In 1553, the Italian architect, engineer and mathematician Camillo Agrippa published his "Trattato Di Scientia d 'Poor, Con un Dialogo di Filosofia" ("Treatise on the Science of Arms, with a Philosophical Dialogue"). He applied geometric principles to the analysis of combat. Based on that, he argued that a thrust is faster, and therefore more effective, than a cut. He was also the first to describe, in a published work, how the reach of an attack can be increased by increasing the distance between the feet after stretching the arm. This is how he describes a precursor to the stoccade, or lunge. He also presents four guards: Prima, Secunda, Tertia and Quarta, which reasonably correspond to the four hand positions in later rapier fencing. Camillo Agrippa is therefore seen as an important founder of rapier fencing.

Two important trends in (rapier) fencing art emerged from Agrippa's work. He described a dynamic and athletic fencing art emerged in Italy, which, although still based on geometric and mathematical principles, did not focus strongly on that. The thrust became the most important form of attack because it was faster than the cut. Movement mainly took place along a straight line between the fencers. In Italian rapier fencing, four hand positions based on the positions defined by Agrippa were also used. Important Italian masters were Salvatore Fabris (1544-1618) whose "Lo Schermo, overo Scienza d'Arme" was first published in 1606; Nicoletto Giganti, author of "Scola, overo, Teatro", also published in 1606; Ridolfo Capo Ferro, author of "Gran Simularcro dell'Arte Eddelluso della Scherma" (published in 1610), and Francesco Ferdinando Alfieri. Italian rapier fencing quickly spread throughout Western Europe, and also became an important art of self-defense in, for example, Germany, where Fabris and his students had a great deal of influence.

In Spain, a fencing art with the name "La Verdadera Destreza" evolved. Within Destreza, geometry and mathematics played a much greater role in the handling of the fight. The fencers did not move along a straight line, but approached each other along a circle in order to attack at an angle. The only hand position used within the Destreza is similar to the Italian Tertia, but the arm was always extended parallel to the ground. Important masters within the Destreza were Jerónimo Sánchez de Carranza, author of "De la Filosofía de las Armas y de su Destreza y Aggression y Defensa Cristiana", published in 1582, and Luis Pacheco de Narváez (1570-1640). The fencing art described by Antwerp resident Girard Thibault (1574-1629), who had trained with Narváez in Spain, was strongly influenced by Destreza.

Rapier fencing remained an important art of self-defense in Western Europe until about the end of the 17th century. During this time, both the hilt and the blade of the rapier evolved. The method of fencing also evolved, and the use of dui-tempi counters (parry-riposte) increased compared to the stress-tempo counter. The developments of the hilt were generally aimed at providing better protection for the sword hand, by adding additional rods, metal plates, or even a metal bowl. In social situations, however, the length of the blade and the size of the rapier hilt were perceived as awkward. In France in particular, this led to the development of a sword with a shorter blade and a considerably smaller hilt, something that Thibault was to some extent already in favor of. This court sword (épée de cour in French, also called smallsword in English) was not only shorter but also lighter than the rapier, and was therefore used differently. As the weapon became faster compared to the fencer, while the stress-tempo or counter-tempo counter had been the main reaction to an attack, the parry-riposte (dui-tempi) now became more important. The fencing style with the épée de cour was also more formal and graceful, and the official duel became a more important aspect of the art. 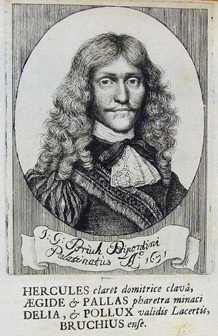 Johannes Georgius Bruchius was Fencing or Fighting Master at the University of Leiden. He was also the author of the book "GRONDIGE BeschRYVINGE van de Edele ende Ridderlijcke SCHERM- ofte WAPEN-KONSTE" (Thorough Description of the Noble and Knightly Fencing- or Weapon-Art"). This is an extensive treatise on the art of fencing with the rapier, illustrated with clear engravings. Bruchius' treatise was printed by Abraham Verhoef in Leiden in 1671, and reprinted by Daniel van den Dalen in Amsterdam in 1676, as can be seen in the bibliographical data for the copy in the collection of the Getty Museum. In this reprint, a strip is stuck on the title page, on which the name of the printer and the year in which the book was printed are adjusted. Copies of Bruchius' treatise can be found in which the author's portrait is either executed by Van Someren, or by Wallerant Vaillant. Despite these differences, however, all copies have the same front page, stating that they were printed by Abraham Verhoef in Leiden in 1671. The copy in the Getty contains the portrait made by Vaillant.

Bruchius came from Zweibrücken in modern Germany, where he was probably born around the year 1630. In the dedication of his Scherm- ofte Wapen-Konste, Bruchius tells us that he was active as a fencing master in the Netherlands from 1655. In that year he came from Heidelberg, where he had been working as a fencing master since 1653, to Utrecht, where he practiced his art "with all praise" until 1660. Bruchius then moved from Utrecht to Leiden, where he was appointed fencing master at the very famous University there. He held this position at least until 1671 (the year in which his book was published). Johann Andreas Schmidt, who later wrote a treatise on fencing himself, is said to be a student of Bruchius in Amsterdam. His book, which was published in Nuremberg in 1713, is very interesting because it is very similar to Bruchius' "Thorough Description" in terms of content, structure, writing style and fencing style. Yet there is no further evidence that Bruchius ever taught in Amsterdam. Bruchius returned to Utrecht in 1680 to teach there again and was a fencing master in Utrecht until his death in 1717 or 1718.

From the introduction of Bruchius' treatise we know that he was familiar with other fencing masters who had published books before him. He refers to the Italian fencing master Salvatore Fabris, as well as Girard Thibault from Antwerp (who had written his "Academie de l'Espée" in French). Bruchius is, however, not a fan of Thibault’s work, which he finds too complicated and therefore takes too much time to learn. The fencing art as described by Bruchius is therefore much more similar to the older Italian fencing style described by Salvatore Fabris and to later German fencing styles with rapier or sword derived from Fabris' art, than to Thibaults "Academie de l'Espée", published 41 years previously and based on the Spanish La Verdadera Destreza.

- Van Noort, Reinier (2016) Short introduction on the most subtle techniques in the Art of Fencing, an English translation of Don Emanuel Friedrich De Bada's "Kort Anledning til de subtileste grep i Fäcktare-Konsten".

- Butera, Matteo, Francesco Lanza and Reinier van Noort (2014) The High Sword, a partial, work in progress English translation of Bondì di Mazo's "La Spada Maestra" (1696).
Bondì di Mazo's La Spada Maestra was first published in Venice in 1696. It is one of only a handful of Italian fencing books of the late 17th century, and as such provides a valuable insight into the development of fencing in Italy. In this work, Di Mazo discusses fencing with the single rapier, as well as with the rapier and dagger, rapier and targa, and rapier and cape.
In this book, Matteo Butera, Francesco Lanza, Jherek Swanger and Reinier van Noort present the first complete English translation of Di Mazo's La Spada Maestra. For fencers, this will provide a bridge between the rapier treatises of the early seventeenth century, and later classical fencing.

- Van Noort, Reinier (2014) Several pieces of Fencing with the Rapier, an English translation of Ms.germ. Fol. 1476 - an anonymous fragmentary German manuscript on fencing, from the 16th or 17th century.

- Van Noort, Reinier (2014) Pieces you can use for defense when in need, an English translation of the second part of Sebastian Heussler's Neu Künstlich Fechtbuch (1615).

- Van Noort, Reinier (2013) A great and secret Master-Piece of the Noble Art of Fencing - an English translation of the fifth part of Johann Andreas Schmidt's Leib-beschirmende und Feinden Trotz-bietende Fecht-Kunst (1713).